Celtic Norse, the cable system which will connect central Norway to Ireland with further connectivity to the United States Eastern Seaboard, today announced a change of ownership which sees Eidsiva Energy, TronderEnergi and NTE each owning a third of the 2000km Subsea fiber optic project between Norway and Ireland.

Eidsiva Energy has taken over ownership of Nordavind DC sites, and Celtic Norse has been recapitalized to continue its work towards an investment decision this summer.

“The change of ownership means that Celtic Norse has been put on a firm footing with 3 energy / fiber companies that together generate annual revenues of more than €2billion”, commented CEO Erling Aronsveen, CEO of Celtic Norse. , “as well as adding an second owner with a considerable terrestrial fiber operation in Norway to carry Celtic Norse from the beach in Trondheim to the central connectivity markets in Skandinavia”.

Nigel Bayliff, CEO of Aqua Comms said “Aqua Comms is delighted to be part of the Celtic Norse development, offering our state-of-the-art Landing Station in County Mayo and providing our integrated cable deployment and management services to the owners and developers of this system.  Connectivity to the Nordics is clearly on the increase, with a number of project announcements, and we are proud to work alongside Celtic Norse in developing this capillary from the large oceanic systems that we have previously developed towards the region.

Celtic Norse are developing two branches to the system, one with Vodafone to Iceland and one to Scotland with SIMEC Atlantis Energy (Atlantis). Atlantis has taken over from Scottish Futures Trust as Celtic Norse’s main partner for the UK landing point and is looking to further develop its tidal stream energy assets and a data centre in northern Scotland.

Celtic Norse AS is now under equal shared ownership between  Eidsiva Energy, NTE and TronderEnergi with expertise in regional grid operations, hydroelectric and wind power production, as well as fiber optic operations.  The combined annual company revenues are approximately €2bn .

The cable is planned to be ready for service (RFS) in 2022 and will drastically shorten the response times for data communications between Norway and the US. The Celtic Norse cable will enable direct connection to the trans-Atlantic AEC-1 cable between Killala Bay, County Mayo in the Republic of Ireland and Shirley, New York in the United States. Additionally, the cable will benefit from the other UK and US connectivity available in Ireland.  The Celtic Norse cable is planned to land at Oysanden, in Melhus municipality in Norway, just south of the city of Trondheim. Onward terrestrial connections going south to Oslo and mainland Europe, as well as spur cables linking northern Norway to Celtic Norse are already in place.

Celtic Norse was incorporated as a limited company in April 2019, and final stages of financing are to be completed by July 2020.

SIMEC Atlantis Energy («Atlantis») is a global developer, owner and operator of sustainable energy assets with a diverse portfolio of projects in various stages of development. This includes a 77% stake in the world’s largest tidal stream power project, the MeyGen array in Scotland, 100% ownership of Europe’s largest 220MW waste energy conversion project in Wales, and 100% ownership of mini-hydro specialist Green Highland Renewables.

Vodafone Iceland is a leading telecommunications and media company that offers all the core aspects of telecommunications and smart media solutions on the Icelandic market.  Vodafone’s focus is on quality service, wide product selection and competitive prices to all customers. Vodafone Iceland works in close cooperation with Vodafone Group regarding international services for the benefit of Vodafone’s Icelandic and international customers.  Vodafone Iceland holds a strong local position both on the enterprise and the consumer market and, with its open innovation strategy, leads the way towards implementation of new and innovative services on the Icelandic market.

Building on its vision of efficient submarine infrastructure ownership, Aqua Comms is currently building America Europe Connect-2 (AEC-2), its share of the Havfrue cable, CeltixConnect-2 (CC-2) and North Sea Connect (NSC), to develop a resilient dual-path network across the Atlantic between North America and Europe, creating the North Atlantic Loop. Aqua Comms operates as a carriers’ carrier and only that, and its FOCUS therefore is on providing high-bandwidth, transport-layer subsea services, and only in the Wholesale market. This FOCUS makes it unique in the market, and your ultimate partner for your Atlantic network needs. For more information, please visit www.aquacomms.com. 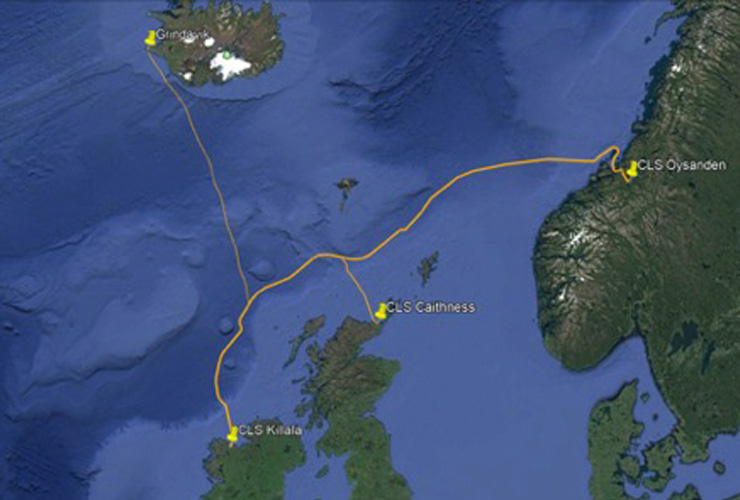