Sticking to the Knitting: An article written by Chief Commercial Officer, Aqua Comms

Tom Peters and Robert Waterman promoted the phrase ‘Sticking to the Knitting’ during the 1980’s and covered this concept in detail in their international best-selling book “In Search of Excellence”.

The concept was to encourage managers to ‘stick to the knitting’ or, in other words, focus on the business you know best. Whilst the 1980’s was an era before the internet became a world-wide phenomenon, the principles are very much in play today – and in the case of Aqua Comms, it sits firmly at the core of its business model.

Aqua Comms is a submarine cable company. Its branding is FOCUS – Fibre Optic Cables Under the Sea. It’s not just a play on words with the acronym – it’s all we do. We work to pursue excellence in this specific part of the Telecoms world.

If we consider the core elements of networks today with the adoption of Cloud and the requirements of the big Internet giants etc, there are 3 main elements:

What Aqua Comms does is build, operate and manage subsea fibre optic cables – and we do this with a team whose extensive experience is primarily in this specific sector, led by CEO Nigel Bayliff (pictured below), who has been designing, building and operating subsea cables for more than 30 years. 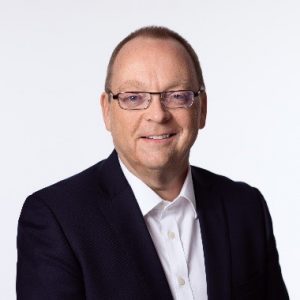 In terms of what we offer in the market, we only deliver Transport-layer services – which for the Atlantic market today is 100G and above. And we only do this in the Wholesale market.

So whilst this is ‘all we do’, it is a complex business that requires expertise to deliver secure and resilient services in the quickest timeframes in the industry – typically quicker than a cross connect.

Our mission is to be the best at it, and to roll this model out around the world where it makes sense. Proving that it can work on the Atlantic market – the most mature market in the world – suggests this is mission that is inherently achievable.

This focus suggests that the industry is going through somewhat of a step change. If we look at the Atlantic market, there was a flurry of cables built between 1999 and 2003, funded typically by carriers and operators through a consortium model, with some though funded privately. The major trans-Oceanic cables now are typically led by the likes of Google and Facebook, and therefore the former operator consortium model is a thing of the past.

Driven by the emergence of the big content and social media platforms, the technology companies such as Ciena, Infinera and Nokia have developed new technology that has created the first of two step changes: the technical capability of new cables.

Whilst this has supported the ever growing requirements of the Googles and Facebooks of the world, it has also created the role of the Independent Infrastructure Player – working with the biggest of users to build, operate and manage new cables to give them what they want, but keeping a significant share to serve the rest of the market in a carrier neutral way.

And so to the second step change: should the operators ever invest directly in a new cable build again? Is the model now to use Independent Infrastructure Players as an outsourced, efficient and dependable network provider?

The benefits to the operators are that they can avoid high capex investments and resource intensive ongoing management, and as with any outsource model, they can secure the best available service without the investment risk but with the benefits of it. With the ever increasing expectations of operators, with new network designs needed for 5G for example, and the huge capex to deliver it, wouldn’t their capital and resources be better focused on this layer of the product stack? ….and leave the base, underlying, core transport infrastructure to those who spend their time only doing this, to facilitate what their users (enterprises and consumers) will ultimately want.

Putting this into Practice

Aqua Comms’ own search for excellence has been applied to its existing subsea cable assets – America-Europe-Connect-1 (AEC-1) running from New York to Dublin, and Celtix-Connect-1 (CC-1) running from Dublin to London. It employs an experienced management team that sits on top of its organisational pyramid structure, covering the core functions of Sales and Marketing, Engineering and Operations, and Corporate Services – but then outsources the majority of the workforce that sits under these management teams.

The clearest example is the NOC. The NOC director is a permanent employee of Aqua Comms reporting into Aqua Comms’ Chief Network Officer, Andy Hudson, and it’s this team that sets the process for the NOC to operate under. But the NOC operating team itself is outsourced to iNOC, a 3rd party organisation based in the US. 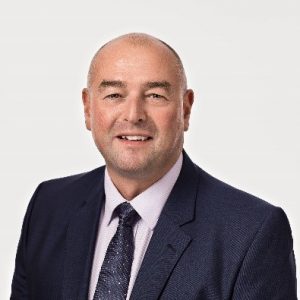 This approach reinforces Aqua Comms’ commitment to ‘sticking to the knitting’ by using a focused and expert organisation to run its NOC day to day, but it also allows it to be scalable and agile to meet to the demands of the marketplace it operates in. A win-win that fits its overall corporate model to be a long-term sustainable infrastructure business delivering secure returns over the life of each cable it operates.

This same model will be used for the 3 new cables that it is building this year:

Once operational, the combination of these 5 cables will deliver the North Atlantic Loop (see below), offering diverse routes across multiple combinations between the US, Ireland, the UK and Scandinavia. 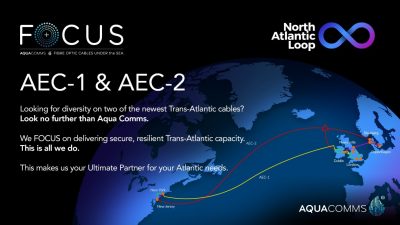 In Search of Network Excellence

“Of necessity, he who pursues a very specialized task will do it best” – Xenophon, philosopher, Ancient Greece, 4th Century BC

The concept in play here is therefore hardly new but working to such principles alone would of course limit the benefit to the customer. Aqua Comms has therefore identified and partnered with those with a similar outlook and approach and has extended its ‘Sticking to the Knitting’ principles through its core partnerships.

At the recent ITW event in Atlanta was the launch party for the North Atlantic Loop with its Data Centre partners: Interxion (Dublin, Copenhagen), NJFX (New Jersey), 1025Connect (Long Island) and Stellium (Newcastle). These partners run the key data centre locations connected to the Aqua Comms’ cables where each offers expertise in data centre services, and they only offer such services and do so in a carrier neutral way. 100% alignment with the approach – to focus on the business they do best. 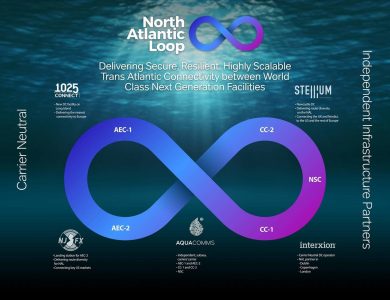 Similarly, Aqua Comms works with terrestrial network providers on both sides of the Atlantic, suited to those with deep 100G-enabled networks connected to the key wholesale city locations across both the US and Europe, and who don’t have investments in subsea cables.

By bringing all 3 core network elements together with like-minded and similarly operated companies, it creates the perfect ecosystem: delivering best-in-class services both in terms of product quality and service delivery, and as a result, delivering the overall customer experience for the network platform needed by the users of it.

So even in the ever-growing and rapidly evolving digital age, it is somewhat surprising but ultimately reassuring that business principles, be they from the 4th Century BC or the 1980’s, that they are very much in play today. The Telecoms industry is going through a step change to deliver the platform needed to deliver on the technologies of the 21st Century.

For more information on Aqua Comms, the North Atlantic Loop and its products services, please contact Aqua Comms through info@aquacomms.com. 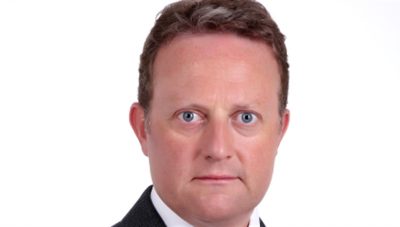 Building on its vision of efficient submarine infrastructure ownership, Aqua Comms is currently building America Europe Connect-2, (AEC-2) , its share of the Havfrue cable, CeltixConnect-2 (CC-2) and North Sea Connect (NSC), to develop a resilient dual-path network across the Atlantic between North America and Europe, creating the North Atlantic Loop. Aqua Comms operates as a carriers’ carrier and only that, and its FOCUS therefore is on providing high-bandwidth, transport-layer subsea services, and only in the Wholesale market. This FOCUS makes it unique in the market, and your ultimate partner for your Atlantic network needs. For more information, please visit www.aquacomms.com 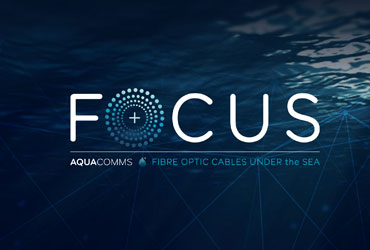