Celtic Norse intends to build the first fibre optic cable between Norway and Ireland, enabling Norway to position itself as a prime entrant into the hyperscale and enterprise data center market.
After performing a request for information in June 2019, Celtic Norse went into a Request for Price (RFP) on 30 September.

Celtic Norse will also be working with Aquacomms Ltd as its operations partner for the venture.
Celtic Norse CEO, Erling Aronsveen, said: “Celtic Norse heads into the RFP with the confidence that a vendor will be selected to build the system by end the of December 2019 and the final stages of financing will be complete with the significant advantage of having a contract signed for a turn-key build.” In continuation he said: “Celtic Norse will provide a significant advantage to the new developing data centre industry in Norway and provide much needed resilience to the countries international connectivity”,

Vodafone Iceland is a member of a multi-sector partnership building one of the most technologically advanced data centers in Iceland. The construction will be in stages, the first of which is scheduled to be complete by the end of 2019. A key element for the Icelandic data center business is a reliable submarine cable connection between Iceland and Europe.

Heiðar Guðjónsson, CEO of Vodafone Iceland, said: “We are very pleased to be members of the consortium for the Celtic Norse project and we believe this initiative will significantly help us growing the data center business out of Iceland. The natural cooling in the Arctic and 100 % renewable energy, will make data centers here the most environmentally friendly and efficient in the world. Celtic Norse might also add up synergies for an interconnected data center market, opening up for partnership or cooperation across the regions.”

James King, Chairman of Host in Scotland, said: “The digital team at Scottish Futures Trust has been working with stakeholders to build an understanding of how it could improve Scotland’s direct connectivity to Europe and USA. There is growing recognition that a direct connection would greatly benefit Scotland’s economy as well as improving national resilience by increasing the number of international subsea fibre links. “I am therefore extremely pleased that we have developed this opportunity with Celtic Norse to further this ambition and we very much look forward to continuing to work with them to investigate the delivery of this strategic connection.”

“We are delighted to be Landing party in Ireland and providing system NOC services to the consortium. The proposed landing in KIllala, Co. Mayo provides an ideal opportunity for resilient connectivity to Dublin, and beyond towards London, and provides for interconnectivity, via America Europe Connect (AEC-1) cable to New York and beyond. Aquacomms specializes in developing,
building and operating SubSea cables; as a neutral, carriers’ carrier this allows us to deliver the best value in submarine cable infrastructure management”, stated Nigel Bayliff – CEO of Aquacomms 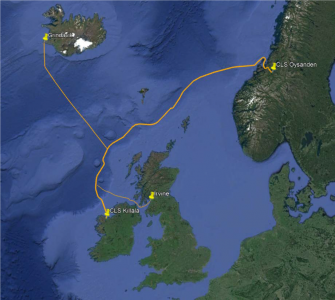 The cable is planned to be ready for service (RFS) in 2021 and will drastically shorten the response times for data communications between Norway and the US. The Celtic Norse cable will enable direct connection to the trans-Atlantic AEC-1 cable between Killala Bay, County Mayo in the Republic of Ireland and Shirley, New York in the United States. Additionally, the cable will benefit from the other UK and US connectivity available in Ireland. The Celtic Norse cable is planned to land at Oysanden, in Melhus municipality in Norway, just south of the city of Trondheim. Onwards terrestrial connections going south to Oslo-and mainland Europe, as well as spur cables linking Northern Norway to Celtic Norse is already in place.

Celtic Norse was floated as a limited company in April this year, and final stages of financing is to be completed by first quarter 2020. Celtic Norse AS is owned 1/3 each by NTE, TrønderEnergi and Nordavind DC Sites AS.

About Scottish Futures Trust
SFT was established by Scottish Government as an independent centre of infrastructure expertise. Its role is to help the public sector plan, innovate, deliver and manage its infrastructure programmes better.

About Host in Scotland
Host in Scotland was created in 2017 as an umbrella organisation to represent and promote the interests of the Scottish Data Centre sector industry. Host in Scotland is funded by the Scottish Futures Trust and Scottish Government with the aim is to promote new investment in the space, be it from existing operators seeking to expand or new entrants to Scotland.

About Aqua Comms
Aqua Comms DAC (“Aqua Comms”) is the owner and operator of America Europe Connect-1 (AEC-1) and CeltixConnect-1 (CC-1), interconnecting New York, Dublin and London.
Building on its vision of efficient submarine infrastructure ownership, Aqua Comms is currently building America Europe Connect-2 (AEC-2), its share of the Havfrue cable, CeltixConnect-2 (CC-2) and North Sea Connect (NSC), to develop a resilient dual-path network across the Atlantic between North America and Europe, creating the North Atlantic Loop. Aqua Comms operates as a carriers’ carrier and only that, and its FOCUS therefore is on providing high-bandwidth, transport-layer subsea services, and only in the Wholesale market. This FOCUS makes it unique in the market, and your ultimate partner for your Atlantic network needs. For more information, please visit www.aquacomms.com.